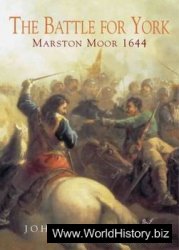 Fought a mere 6 miles from the center of York, Marston Moor was the largest and bloodiest battle of the English Civil War. On July 2, 1644, 18,000 Royalists led by Prince Rupert, Charles I's nephew, fought 27,000 Parliamentarians in an attempt to relieve the Royalist force besieged at York. He failed. The defeat was catastrophic and the north was lost to the Royalists.