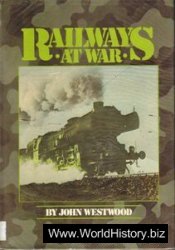 Author: John Westwood
Railways at War
Howell North Books
1980
ISBN: 0831071389
Format: PDF
Size: 31,3 МБ
Language: English
Pages: 224
Superb British history of the use of railroads in war, beginning with the Prussian General Staff in 1830 which carried out the first study of their practical military use. The author explains that it took a surprisingly long time for the Great Powers to utilize railways and that it was their decisive impact during the American Civil War that showed how important they could be. By World War I, railroads were an integral part of warfare and had, the book argues, almost as profound an effect on warfare as the introduction of gunpowder. The ability to mobilize and support millions of troops was the hallmark of the "total war" that rail transport made possible. Packed with vivid and provocative vignettes and illustrated throughout with black and white photos, this book is essential reading for every railway enthusiast and student of military history. 224 pages with index.