Counter-Thrust: From the Peninsula to the Antietam 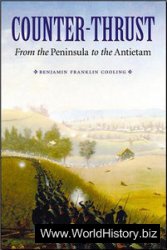 Author: Benjamin Franklin Cooling
Counter-Thrust: From the Peninsula to the Antietam
University of Nebraska Press
2008
ISBN: 0803215150
Format: PDF
Size: 12,6 МБ
Language: English
Pages: 385
During the summer of 1862, a Confederate resurgence threatened to turn the tide of the Civil War. When the Union’s earlier multitheater thrust into the South proved to be a strategic overreach, the Confederacy saw its chance to reverse the loss of the Upper South through counteroffensives from the Chesapeake to the Mississippi. Benjamin Franklin Cooling tells this story in Counter-Thrust, recounting in harrowing detail Robert E. Lee’s flouting of his antagonist George B. McClellan’s drive to capture the Confederate capital at Richmond and describing the Confederate hero’s long-dreamt-of offensive to reclaim central and northern Virginia before crossing the Potomac.