The Last Days of Stonewall Jackson: The Mortal Wounding of the Confederacy's Greatest Icon 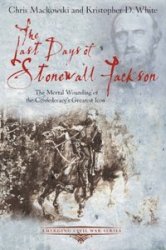 Author: Chris Mackowski, Kristopher White
The Last Days of Stonewall Jackson: The Mortal Wounding of the Confederacy's Greatest Icon
Savas Beatie
2013
ISBN: 1611211506
Format: EPUB
Size: 19,0 МБ
Language: English
Pages: 168
May 1863. The Civil War was in its third spring, and Confederate Lt. Gen. Thomas Jonathan Jackson stood at the peak of his fame. He had arisen from obscurity to become “Old Stonewall,” adored across the South and feared and respected throughout the North.
On the night of May 2, however, just hours after Jackson executed the most audacious maneuver of his career and delivered a crushing blow against an unsuspecting Union army at Chancellorsville, disaster struck.
The Last Days of Stonewall Jackson recounts the events of that fateful night—considered one of the most pivotal moments of the war—and the tense vigil that ensued as Jackson struggled with a foe even he could not defeat. From Guinea Station, where Jackson crosses the river to rest under the shade of the trees, the story follows Jackson’s funeral and burial, the strange story of his amputated arm, and the creation and restoration of the building where he died (now known as the Stonewall Jackson Shrine). This newly revised and expanded second edition features more than 50 pages of fresh material, including almost 200 illustrations, maps, and eye-catching photos.