The Maps of Chickamauga An Atlas of the Chickamauga Campaign, Including the Tullahoma Operations, June 22 - September 23, 1863 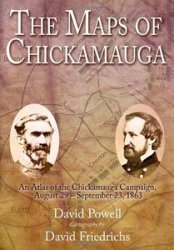 Author: David Powell
The Maps of Chickamauga An Atlas of the Chickamauga Campaign, Including the Tullahoma Operations, June 22 - September 23, 1863
Savas Beatie
2009
ISBN: 1932714723
Format: EPUB
Size: 42,7 МБ
Language: English
Pages: 319
he Maps of Chickamauga explores this largely misunderstood battle through the use of full-color maps, graphically illustrating the complex tangle of combat’s ebb and flow that makes the titanic bloodshed of Chickamauga one of the most confusing actions of the American Civil War.
Track individual regiments through their engagements at fifteen to twenty-minute intervals or explore each army in motion as brigades and divisions maneuver and deploy to face the enemy. The Maps of Chickamauga allows readers to fully grasp the action at any level of interest.
Now available as an ebook short, The Maps of Chickamauga: The Second Day and the Retreat, September 20 – 23, 1863 plows new ground in the study of the campaign by breaking down the entire campaign in 60 detailed full page original maps. Situation maps reflect the posture of each army on an hourly basis, while tactical maps reveal the intricacies of regimental and battery movements.