The Maps of Antietam An Atlas of the Antietam (Sharpsburg) Campaign, including the Battle of South Mountain, September 2 - 20, 1862 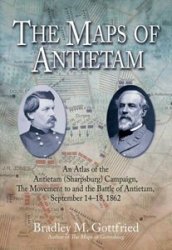