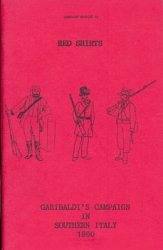 
The purpose of this booklet is to provide wargamers with a basic and easy to consult guide to the organization and uniforms worn by the armies which fought in Italy in 1860. Like its sister booklet on the Second Italian War of Independence, only those uniforms actually worn in the field are described. For the forces of Garibaldi, only those that fought from the landing at Marsala to the battle on the River Volturno are listed. Other units that joined Garibaldi later played only a marginal role in the last stages of the campaign.