Empire - How Britain Made the Modern World 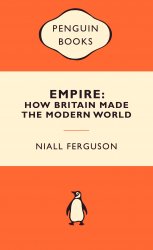 At its peak in the nineteenth century, the British Empire was the largest empire ever known, governing roughly a quarter of the world's population. In Empire, Niall Ferguson explains how "an archipelago of rainy islands... came to rule the world," and examines the costs and consequences, both good and bad, of British imperialism. Though the book's breadth is impressive, it is not intended to be a comprehensive history of the British Empire; rather, Ferguson seeks to glean lessons from this history for future, or present, empires--namely America. Pointing out that the U.S. is both a product of the British Empire as well as an heir to it, he asks whether America--an "empire in denial"--should "seek to shed or to shoulder the imperial load it has inherited." As he points out in this fascinating book, there is compelling evidence for both.