Rise of the Bourgeoisie, Demise of Empire Ottoman Westernization and Social Change 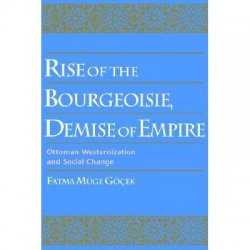 Author: Fatma Muge Gocek
Rise of the Bourgeoisie, Demise of Empire Ottoman Westernization and Social Change
Oxford University Press
ISBN: 0195099257
1996
Format: PDF
Size: 15,6 МБ
Language: English
Pages: 232
What are the causes of imperial decline? This work studies the Ottoman empire in the 18th and 19th centuries to argue that the Ottoman imperial decline resulted from a combination of Ottoman internal dynamics with external influences. Specifically, it contends that the split within the Ottoman social structure across ethno-religious lines interacted with the effects of war and commerce with the West to produce a bifurcated Ottoman bourgeoisie. This bourgeoisie, divided into disparate commercial and bureaucratic elements, was able to challenge the sultan but was ultimately unable to salvage the empire. Instead, the Ottoman empire was replaced by the Turkish nation-state and others in the Balkans and the Middle East. This work will appeal to students of sociology and Ottoman studies.