Pirate Hunter of the Caribbean: The Adventurous Life of Captain Woodes Rogers 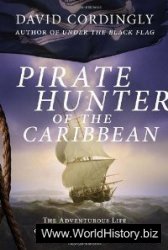 Author: David Cordingly
Pirate Hunter of the Caribbean: The Adventurous Life of Captain Woodes Rogers
Random House
ISBN: 1400068150
2011
Format: EPUB
Size: 7,4 МБ
Language: English
Pages: 320
From David Cordingly, one of the world’s foremost experts on pirate history, and author of the perennial favorite Under the Black Flag, comes the thrilling story of the man who fought the real pirates of the Caribbean. Sea captain, privateer, and colonial governor, Woodes Rogers was one of the early eighteenth century’s boldest and most colorful characters. Pirate Hunter of the Caribbean is the definitive account of his incredible life.
At a time when Europe’s maritime nations fought over islands and territories, and pirates and other scoundrels were flourishing, Rogers sailed into the center of the action. In 1708, in the midst of Britain’s war with Spain, Rogers was hired to lead a mission against Spanish targets in the Pacific. A fearless adventurer who lost his fortune as often as his temper, he battled scurvy and hurricanes and mutinies—and along the way captured a treasure galleon and rescued the shipwrecked Alexander Selkirk, whose four-year ordeal on a remote Pacific island inspired Daniel Defoe to write Robinson Crusoe.
When the Treaty of Utrecht in 1713 led to an explosion of piracy in the Caribbean, King George I appointed Rogers governor of the Bahamas. There he found himself in charge of a string of islands being plundered by raucous felons, from the notorious “Blackbeard,” who kept lit matches under his hat to give himself a hellish cast, to Charles Vane, a particularly brutal pirate captain, to Anne Bonny and Mary Read, rare female pirates who escaped the hangman’s noose only by revealing their pregnancies.
With rich and vivid details and plenty of action, David Cordingly chronicles a rollicking adventure that is as fascinating and gripping as any seafaring legend.