Scholastic Encyclopedia of the Presidents and Their Times 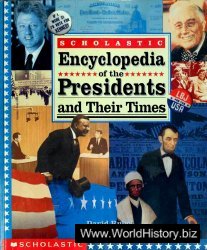 In 1789, George Washington became the first president of the United States. More than forty others have followed him. The ninth president, William Henry Harrison, served less than a month. Franklin Roosevelt, the thirty-second president, served for twelve years. During Roosevelt's term, which spanned the Great Depression and World War II, the country changed a great deal. But the same can be said for almost any president. Each president's term in office is usually shaped by important events both inside and and outside the United States.