Naturalists at Sea: Scientific Travellers from Dampier to Darwin 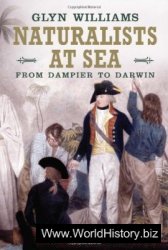 On the great Pacific discovery expeditions of the “long eighteenth century,” naturalists for the first time were commonly found aboard ships sailing forth from European ports. Lured by intoxicating opportunities to discover exotic and perhaps lucrative flora and fauna unknown at home, these men set out eagerly to collect and catalogue, study and document an uncharted natural world.
This enthralling book is the first to describe the adventures and misadventures, discoveries and dangers of this devoted and sometimes eccentric band of explorer-scholars. Their individual experiences are uniquely their own, but together their stories offer a new perspective on the extraordinary era of Pacific exploration and the achievements of an audacious generation of naturalists. Historian Glyn Williams illuminates the naturalist’s lot aboard ship, where danger alternated with boredom and quarrels with the ship’s commander were the norm. Nor did the naturalist’s difficulties end upon returning home, where recognition for years of work often proved elusive. Peopled with wonderful characters and major figures of Enlightenment science—among them Louis Antoine de Bouganville, Joseph Banks, John Reinhold Forster, Captain Cook, and Charles Darwin—this book is a gripping account of a small group of scientific travelers whose voyages of discovery were to change perceptions of the natural world.