Collapse of an Empire: Lessons for Modern Russia 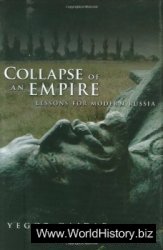 "My goal is to show the reader that the Soviet political and economic system was unstable by its very nature. It was just a question of when and how it would collapse...." —From the Introduction to Collapse of an Empire The Soviet Union was an empire in many senses of the word —a vast mix of far-flung regions and accidental citizens by way of conquest or annexation. Typical of such empires, it was built on shaky foundations. That instability made its demise inevitable, asserts Yegor Gaidar, former prime minister of Russia and architect of the "shock therapy" economic reforms of the 1990s. Yet a growing desire to return to the glory days of empire is pushing today's Russia backward into many of the same traps that made the Soviet Union untenable. In this important new book, Gaidar clearly illustrates why Russian nostalgia for empire is dangerous and ill-fated: "Dreams of returning to another era are illusory. Attempts to do so will lead to defeat." Gaidar uses world history, the Soviet experience, and economic analysis to demonstrate why swimming against this tide of history would be a huge mistake. The USSR sowed the seeds of its own economic destruction, and Gaidar worries that Russia is repeating some of those mistakes. Once again, for example, the nation is putting too many eggs into one basket, leaving the nation vulnerable to fluctuations in the energy market. The Soviets had used revenues from energy sales to prop up struggling sectors such as agriculture, which was so thoroughly ravaged by hyperindustrialization that the Soviet Union became a net importer of food. When oil prices dropped in the 1980s, that revenue stream diminished, and dependent sectors suffered heavily. Although strategies requiring austerity or sacrifice can be politically difficult, Russia needs to prepare for such downturns and restrain spending during prosperous times. Collapse of an Empire shows why it is imperative to fix the roof before it starts to rain, and why sometimes the past should be left in the past.