Fertility And Pleasure: Ritual And Sexual Values in Tokugawa Japan 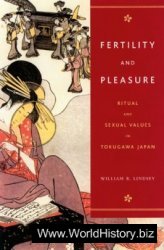 As their ubiquitous presence in Tokugawa artwork and literature suggests, images of bourgeois wives and courtesans took on iconic status as representations of two opposing sets of female values. Their differences, both real and idealized, indicate the full range of female roles and sexual values affirmed by Tokugawa society, with Buddhist celibacy on the one end and the relatively free sexual associations of the urban and rural lower classes on the other. The roles of courtesan and bourgeois housewife were each tied to a set of value-based behaviors, the primary institution to which a woman belonged, and rituals that sought to model a woman's comportment in her interactions with men and figures of authority. For housewives, it was fertility values, promulgated by lifestyle guides and moral texts, which embraced the ideals of female obedience, loyalty to the husband's household, and sexual activity aimed at producing an heir. Pleasure values, by contrast, flourished in the prostitution quarters and embraced playful relations and nonreproductive sexual activity designed to increase the bordello's bottom line. What William Lindsey reveals in this well-researched study is that, although the values that idealized the role of wife and courtesan were highly disparate, the rituals, symbols, and popular practices both engaged in exhibited a degree of similitude and parallelism. "Fertility and Pleasure" examines the rituals available to young women in the household and pleasure quarters that could be employed to affirm, transcend, or resist these sets of sexual values. In doing so it affords new views of Tokugawa society and Japanese religion. Highly original in its theoretical approach and its juxtaposition of texts, "Fertility and Pleasure" constitutes an important addition to the fields of Japanese religion and history and the study of gender and sexuality in other societies and cultures.