Napoleon: The End of Glory 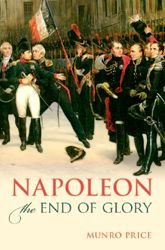 Exploring a critical and often neglected period of Napoleonic history between 1812 and 1814,
Napoleon: The End of Glory offers a more complete picture of the Emperor's decline and fall
than any previous work.
Price analyzes the political, military, and diplomatic events of the period, from Napoleon's
disastrous invasion of Russia in 1812 to the multiple failed attempts by Austria to broker peace.
He illuminates the dynamic relationships between Napoleon and the wily Austrian
foreign minister Metternich - whose desire for equilibrium within the European states system
clashed with Napoleon's unshakeable belief in hegemony and subjection - and the charming
and enigmatic Alexander I of Russia. And he explores the lasting impact of the bloody Terror
of the French Revolution on Napoleon's decisions once he came to power.