The Sources of Social Power: Volume 1, A History of Power from the Beginning to AD 1760 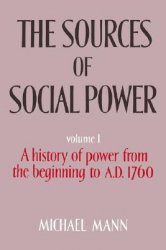 This is the first part of a three-volume work on the nature of power in human societies. In it, Michael Mann identifies the four principal 'sources' of power as being control over economic, ideological, military, and political resources. He examines the interrelations between these in a narrative history of power from Neolithic times, through ancient Near Eastern civilisations, the classical Mediterranean age, and medieval Europe, up to just before the Industrial Revolution in England. Rejecting the conventional monolithic concept of a 'society', Dr. Mann's model is instead one of a series of overlapping, intersecting power networks. He makes this model operational by focusing on the logistics of power - how the flow of information, manpower, and goods is controlled over social and geographical space-thereby clarifying many of the 'great debates' in sociological theory. The present volume offers explanations of the emergence of the state and social stratification.