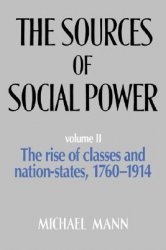 Author: Michael Mann
The Sources of Social Power: Volume 2, The Rise of Classes and Nation States 1760-1914
Cambridge University Press
2006
Format: pdf
Language: English
Size: 8.82 MBThis second volume of Michael Mann's analytical history of social power deals with power relations between the Industrial Revolution and the First World War, focusing on France, Great Britain, Hapsburg Austria, Prussia/Germany and the United States. Based on considerable empirical research it provides original theories of the rise of nations and nationalism, of class conflict, of the modern state and of modern militarism. While not afraid to generalize, it also stresses social and historical complexity. The author sees human society as "a patterned mess" and attempts to provide a sociological theory appropriate to this. This theory culminates in the final chapter, an original explanation of the causes of the First World War