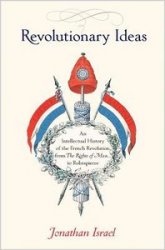 Author: Jonathan Israel
Revolutionary Ideas An Intellectual History of the French Revolution from The Rights of Man to Robespierre
Princeton University Press
2014
ISBN: 0691151725
Format: PDF
Size: 17,2 МБ
Language: English
Pages: 888
Historians of the French Revolution used to take for granted what was also obvious to its contemporary observers--that the Revolution was caused by the radical ideas of the Enlightenment. Yet in recent decades scholars have argued that the Revolution was brought about by social forces, politics, economics, or culture--almost anything but abstract notions like liberty or equality. In Revolutionary Ideas, one of the world's leading historians of the Enlightenment restores the Revolution's intellectual history to its rightful central role. Drawing widely on primary sources, Jonathan Israel shows how the Revolution was set in motion by radical eighteenth-century doctrines, how these ideas divided revolutionary leaders into vehemently opposed ideological blocs, and how these clashes drove the turning points of the Revolution.