The Curse of the Romanovs 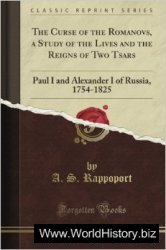 Author:Angelo Solomon Rappoport
The Curse of the Romanovs: A Study of the Lives and the Reigns of Two Tsars Paul I and Alexander I of Russia: 1754-1825
Chatto & Windus
1907
Format: PDF
Size: 15.63 MB
Language:English


The eyes of Europe are directed towards Russia, the European China, where the scion of the house of Romanov is seated on his tottering throne, frightened at the phantom of an approaching Revolution. Convulsively he is clinging to the throne of his ancestors, reluctant to give up what he considers his right. But has Nicholas II a right to the Russian throne? Yes, the right of the usurper! Michael Romanov was elected Tsar of Russia by the voice of the nation, but Peter I, his grandson, was the son of an unknown parent. The Tsar himself knew that he was not the son of Alexis, and one day he asked Count Yaguzhinsky to tell him whether he was his father. The Count, however, replied that it was difficult to say, as the Tsaritza had so many lovers. Elizabeth may or may not have been the daughter of Peter the Great. She was in any case the daughter of Catherine I, a former Livonian servant. The legitimacy of Paul I is doubtful, and if one is to believe the confessions of Catherine 11 he was not a Romanov. For nearly three centuries these so-called Romanovs have ruled over Russia, but they have remained strangers to the people under the sway of their sceptre.