Surrounded by Dangers of All Kinds. The Mexican War Letters of Lieutenant Theodore Laidley 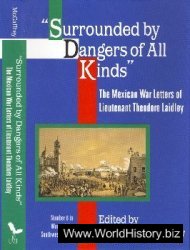 Lieutenant Theodore Laidley, a West Point graduate whose army career spanned forty years until his retirement as a colonel in 1882, was a young officer during the Mexican War. Like so many of his fellow soldiers he wrote long letters home describing new and unusual sights and events. Laidley landed at Veracruz in March 1847, and assisted in the reduction of that port city. He commanded a field battery at Cerro Gordo as General Winfield Scott began his march into the interior. He was at the siege of Puebla and instrumental in denying that city to Santa Anna, and was active around Mexico City after the final victory. Laidley's letters offer his opinions on the war, his fellow soldiers, volunteers, politics, Mexico, and his own personal experiences. This book is part of the publisher's War and the Southwest Series.