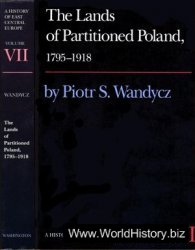 The Lands of Partitioned Poland, 1795-1918 (History of East Central Europe Volume VII)
Author: Piotr S. Wandycz
University of Washington Press
ISBN: 0295953586
1993
Pages: 431
Format: PDF
Size: 176.44МБ
Language: English
The Lands of Partitioned Poland, 1795-1918 comprehensively covers an important, complex, and controversial period in the history of Poland and East Central Europe, beginning in 1795 when the remnanst of the Polish Commonwealth were distributed among Prussia, Austria, and Russia, and culminating in 1918 with the re-establishment of an independent Polish state. Until this thorough and authoritative study, literature on the subject in English has been limited to a few chapters in multiauthored works.
Chronologically, Wandycz traces the histories of the lands under Prussian, Austrian, and Russian rule, pointing out their divergent evolution as well as the threads that bound them together. The result is a balanced, comprehensive picture of the social, political, economic, and cultural developments of all nationalities inhabiting the land of the old commonwealth, rather than a limited history of one state (Poland) and one people (the Poles).