The Opium War: Drugs, Dreams and the Making of China 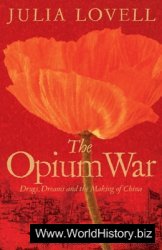 The Opium War is a very balanced and accessible account of a not-so glorious period of British history. The British went to war mainly to open up China to trade in general, and to keep the profitable opium trade in particular, which the Chinese were trying to shut down due to the horrendous effect opium had on the country's population. Interestingly, the British mostly justified the war by saying they were librating the Chinese people, who wanted to trade, but were reluctant to do so because of their repressive empire.
Lovell's account of this important historical event is based on Western and Chinese sources which help shed some light on how the Chinese viewed the Western world in those days.
Highly recommended for those, who are interested in learning more about the historical events that shaped how China views the West today.