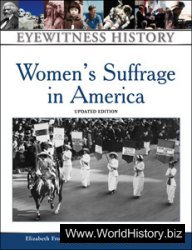 At the start of the 19th century, women had severely limited rights. They had no control of their earnings, could not divorce a husband, had no claim of property, could not speak at public meetings, and could not vote. The women's suffrage movement, a political campaign that sought to address these problems, began around 1800 and culminated in 1920 with the passage of the 19th Amendment, giving women the right to vote. Led by women such as Susan B. Anthony, Lucy Stone, and Elizabeth Cady Stanton, the members of this movement petitioned Congress, marched, and gave speeches in the face of public disapproval in an effort to achieve their goals.
Black-and-white photographs and illustrations. Maps. Index. Appendixes. Bibliography. Chronologies. Notes.