What Was History?: The Art of History in Early Modern Europe 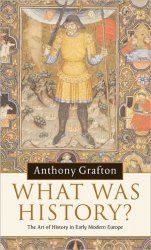 From the late-fifteenth century onwards, scholars across Europe began to write books about how to read and evaluate histories. These pioneering works - which often take surprisingly modern-sounding positions - grew from complex early modern debates about law, religion, and classical scholarship. In this book, based on the Trevelyan Lectures of 2005, Anthony Grafton explains why so many of these works were written, why they attained so much insight - and why, in the centuries that followed, most scholars gradually forgot that they had existed.