Railroaded: The Transcontinentals and the Making of Modern America 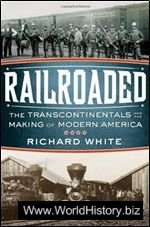 A new, incisive history of the transcontinental railroads and how they transformed America in the decades after the Civil War.The transcontinental railroads of the late nineteenth century were the first corporate behemoths. Their attempts to generate profits from proliferating debt sparked devastating panics in the U.S. economy. Their dependence on public largess drew them into the corridors of power, initiating new forms of corruption. Their operations rearranged space and time, and remade the landscape of the West.