The Twilight of Imperial Russia 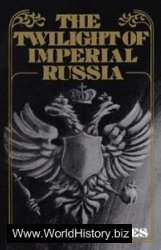 This books explains the last 23 years of Imperial Russia and why Nicholas II and the Romanov family lost their throne. At several points in his rule, if Nicholas had changed his methods, Imperial Russia may have survived and evolved into something like Great Britain. However, Nicholas made many mistakes and as a result lost both his life and that of his family. What the author does is state what Nicholas could have done in several instances and what was the likely outcome. In fact, before the beginning of WWI, the Menosheviks, Bolsheviks, and SRs were battling among themselves and were not credible as an opponent. However, Nicholas made stupid decisions (or let his wife make them) and this resulted in an autocracy that was no longer a ruling force for most Russians.