Witch Hunts in Europe and America: An Encyclopedia 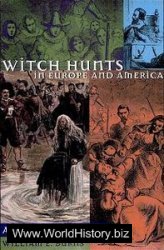 From the wicked witch of children's stories to Halloween and present-day Wiccan groups, witches and witchcraft still fascinate observers of Western culture. Witches were believed to affect climatological catastrophes, put spells on their neighbours and cavort with the devil. In early modern Europe and the Americas, witches and witch-hunting were an integral part of everyday life, touching major events such as the Reformation and the Scientific Revolution, as well as politics, law, medicine and culture. From early sorcery trials of the 14th century - associated primarily with French and Papal courts - to the witch executions of the late 18th century, this title's entries cover witch-hunting in individual countries; major witch trials from Chelmsford, England, to Salem, Massachusetts; and significant individuals from famous witches to the devout persecutors. Entries such as the evil eye, familiars, and witch-finders cover specific aspects of the witch-hunting process, while entries on writers and modern interpretations provide insight into the current thinking on early modern witch hunts.