Albert Speer - The End of a Myth 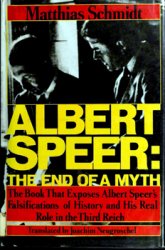 Did the master builder of the Third Reich, Albert Speer, really not know about the Nazi extermination camps? What did he conceal from Allied interrogators, and from the millions who bought his memoirs, INSIDE THE THIRD REICH? Here is the chilling, documented tale about the "hero" of the Nuremberg Trials. In this book, which was an immediate best-seller in Europe, historian Matthias Schmidt interweaves documentary evidence with his own interviews with Speer's former colleagues. He unravels the most carefully crafted falsification in modern history--Albert Speer's memoirs dangerously polluted history. Schmidt's book purifies the record.