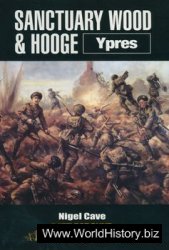 This guide to the battlefields of Ypres is intended for both the casual tourist and the serious scholar. Sanctuary Wood and the village of Hooge saw intense fighting during World War I, being situated for much of the time in the front line of the notorious Ypres Salient. Beginning at the museum at the wood itself, the book takes the reader on an explanatory tour of the immediate area, which includes the neighbouring British cemetery. Text and supporting photographs help to explain the significance of individual burials, such as that of the German aviator, Hans Roser, the victim of an air battle with the Royal Flying Corps pilot, Lance Hawker, who for his exploits in this action and others on the same day was awarded the first VC for aerial combat.