After We Kill You, We Will Welcome You Back as Honored Guests: Unembedded in Afghanistan 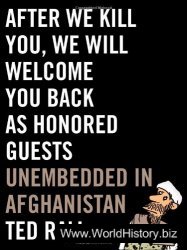 Author: Ted Rall
After We Kill You, We Will Welcome You Back as Honored Guests: Unembedded in Afghanistan
Hill and Wang
2014
Format: epub/pdf
Size: 41 Mb
Language: English

An unflinching account—in words and pictures—of America’s longest war by our most outspoken graphic journalist
Ted Rall traveled deep into Afghanistan—without embedding himself with U.S. soldiers, without insulating himself with flak jackets and armored SUVs—where no one else would go (except, of course, Afghans).
He made two long trips: the first in the wake of 9/11, and the next ten years later to see what a decade of U.S. occupation had wrought. On the first trip, he shouted his dispatches into a satellite phone provided by a Los Angeles radio station, attempting to explain that the booming in the background—and sometimes the foreground—were the sounds of an all-out war that no one at home would entirely own up to. Ten years later, the alternative newspapers and radio station that had financed his first trip could no longer afford to send him into harm’s way, so he turned to Kickstarter to fund a groundbreaking effort to publish online a real-time blog of graphic journalism (essentially, a nonfiction comic) documenting what was really happening on the ground, filed daily by satellite.
The result of this intrepid reporting is After We Kill You, We Will Welcome You Back as Honored Guests—a singular account of one determined journalist’s effort to bring the realities of life in twenty-first-century Afghanistan to the world in the best way he knows how: a mix of travelogue, photography, and award-winning comics.