Hunting Evil: The Nazi War Criminals Who Escaped and the Quest to Bring Them to Justice 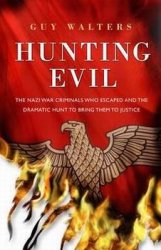 At the end of the Second World War some of the highest ranking members of the Nazi party escaped from justice. Some of them are names that have resonated deeply in twentieth-century history - Eichmann, Mengele, Martin Bormann and Klaus Barbie - not just for the monstrosity of their crimes, but also because of the shadowy nature of their post-war existence, holed up in the depths of Latin America, always one step ahead of their pursuers.
The nature of their escape was as gripping as any good thriller. They were aided and abetted by corrupt Catholic priests in the Vatican, they travelled down secret 'rat lines', hid in foreboding castles high in the Austrian alps, and were taken in by shady Argentine secret agents. The attempts to bring them to justice are no less dramatic, with vengeful Holocaust survivors, inept politicians, and daring plots to kidnap or assassinate the fugitives.
Guy Walters has travelled the world in pursuit of the real account of how the Nazis escaped at the end of the war, the attempts, sometimes successful, to bring them to justice, and what really happened to those that got away. He has interviewed Nazi hunters, former members of Mossad, and poured through archives across the globe to bring this remarkable period of our recent history to dramatic and vivid life.