Distant Ties: Germany, the Ottoman Empire, and the Construction of the Baghdad Railway 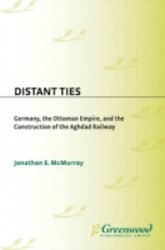 Author: Jonathan S. McMurray
Distant Ties: Germany, the Ottoman Empire, and the Construction of the Baghdad Railway
Praeger
ISBN: 0275970639
2001
Format: PDF
Size: 9,4 МБ
Language: English
Pages: 168
As the first study to document the Baghdad Railway construction, rather than the rhetoric surrounding it, this work challenges nearly a century of scholarship on German imperialism and Ottoman decline--scholarship that has too often hinged on the alleged Great Power victimization of the Ottoman Empire. McMurray unearths a fascinating, intercultural dimension of the railway and provides a comprehensive, detailed account of the Ottoman contribution. His work denies the German character of the railway by showing it to be an exclusively Ottoman enterprise designed by German engineers, funded by international capital, and built by a veritable army of Ottoman subjects.