Mapping the Ottomans: Sovereignty, Territory, and Identity in the Early Modern Mediterranean 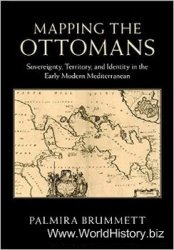 Simple paradigms of Muslim-Christian confrontation and the rise of Europe in the seventeenth century do not suffice to explain the ways in which European mapping envisioned the “Turks” in image and narrative. Rather, maps, travel accounts, compendia of knowledge, and other texts created a picture of the Ottoman Empire through a complex layering of history, ethnography, and eyewitness testimony, which juxtaposed current events to classical and biblical history; counted space in terms of peoples, routes, and fortresses; and used the land and seascapes of the map to assert ownership, declare victory, and embody imperial power's reach. Enriched throughout by examples of Ottoman self-mapping, this book examines how Ottomans and their empire were mapped in the narrative and visual imagination of early modern Europe's Christian kingdoms. The maps serve as centerpieces for discussions of early modern space, time, borders, stages of travel, information flows, invocations of authority, and cross-cultural relations.