The Seafarers - The Spanish Main 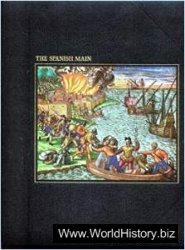 Like other books in this venerable Time-Life Seafarer series, it really fills knowledge & understanding, illuminating the politics & philosophies that created the conditions which allowed piracy to develop & flourish. For example, the buccaneers who became pirates are famous for their hunting & trading in meat & hides but--having seen how few wild animals exist on many Caribbean islands--I never fully understood where those animals were coming from [feral livestock from homesteads in the Spanish Caribbean abandoned in favor of treasure hunting on the mainland], or who the men were [a mixture of former indentured-servants, sailors, slaves & settlers displaced by belated enforcement of Spanish land claims in the outlying islands]. It was also interesting to learn about efforts to eradicate the pirates through means ranging from political treaties forbidding letters of marque, to the more effective efforts of D'Ogeron, who filled a ship with Parisian prostitutes & sold the ladies to the Tortuga buccaneers as wives, settling them right down.