The Seafarers - The Venetians 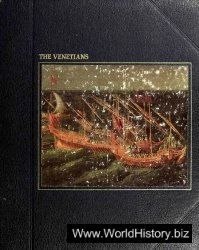 Another one of those old Time-Life books, heavily illustrated, with a chatty text broken down into bits easy to comprehend. Generally good jobs, and this one is as good as any. Very good introduction to the Venetians. It wasn't just gondolas being pushed along by fellows with big mustaches. These were the shock troops of the West, at one time. How did you think the Parthenon got blown up? It didn't last forever. The Med was the world's oyster as Europe came stumbling out of the Dark Ages, led by the Italian city-states, Venice in the commercial and military lead. But there were further shores, trans-Atlantic and trans-Pacific and trans-India Ocean. And the Venetians were no better with these than the Greeks had been. The Portuguese, the Spaniards, the English, the French, everybody wound up surpassing them. They were eaten by the French. There's a special value to this particular Time-Life installment, though. This one was written by Colin Thubron, one of the best living travel writers in the English language.