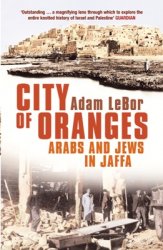 Jaffa - famed for its orange groves - was for centuries a city of traders, merchants, teachers and administrators, home to Muslims, Christians and Jews alike. That is, until the founding of the state of Israel, which was simultaneously a moment of jubilation for the Jews and a disaster - the Naqba - for the 100,000 Arabs who fled Jaffa in 1948. Through the stories of six families - three Arab and three Jewish - Adam LeBor delicately illuminates the complexity of modern Israel, going beyond the media stereotypes and political rhetoric to tell a moving human story. From the Christian Arab car-dealer, the Jewish coffee-and-spice merchant and the Arab baker who makes bread for the whole community, to the Jewish schoolgirl who befriends an Arab drug dealer, these people strive to make a life in a country born of conflict.