A History of Japan: From Stone Age to Superpower 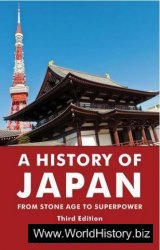 Japan's impact on the modern world has been enormous. It occupies just one 300th of the planet's land area, yet came to wield one sixth of the world's economic power. Just 150 years ago it was an obscure land of paddy fields and feudal despots. Within 50 years it became a major imperial power – it's so-called 'First Miracle'. After defeat in the Second World War, when Japan came close to annihilation, within 25 years it recovered remarkably to become the world's third biggest economy – it's 'Second Miracle'. It is now not only an economic superpower, but also a technological and cultural superpower. True miracles have no explanation: Japan's 'miracles' do. The nation's success lies in deeply ingrained historical values, such as a pragmatic determination to succeed. The world can learn much from Japan, and its story is told in these pages.