Flowers in the Blood: The Story of Opium 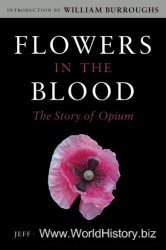 Opium has played a dramatic and varied role in human history, inspiring religious veneration, scientific exploration, the bitterest rancor, and the most fanciful ecstasy. Now, authors Jeff Goldberg and Dean Latimer have provided a complete, insightful history of opium. Flowers in the Blood lifts the veil of mystery that has surrounded opium down through the ages. Inside, discover:
• Why a three-thousand-year-old statue of a Greek goddess was crowned with poppies
• The formulas for Hippocrates’s ancient opium remedies
• Why the Islamic councils of the wise vilified hashish but venerated opium
• Why there was no opium problem in nineteenth-century England and America despite unprecedented and unrestricted consumption of opiates
• What really provoked the Opium Wars in China
• Why John Jacob Astor quit the opium trade
• The unique role played by Chinese opium in the birth of the American labor movement
Along the way, the authors provide details of the addictions of S. T. Coleridge, Thomas De Quincey, and other literary opium-eaters of the nineteenth century, as well as chronicling the progress of antidrug laws and the ongoing search for an addiction cure.
Originally published in 1981, this edition of Flowers in the Blood has been updated with a new preface by Goldberg. At times disconcerting—raising serious questions about attitudes and approaches toward powerful drugs and their control—Flowers in the Blood is an essential addition to the literature of opium, and a wide-awake look at the stuff that dreams (and nightmares) are made of.