Cultures of the Jews: A New History 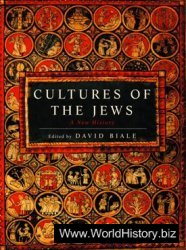 Who are “the Jews”? Scattered over much of the world throughout most of their three-thousand-year-old history, are they one people or many? How do they resemble and how do they differ from Jews in other places and times? What have their relationships been to the cultures of their neighbors?
To address these and similar questions, twenty-three of the finest scholars of our day—archaeologists, cultural historians, literary critics, art historians , folklorists, and historians of relation, all affiliated with major academic institutions in the United States, Israel, and France—have contributed their insight to Cultures of the Jews. The premise of their endeavor is that although Jews have always had their own autonomous traditions, Jewish identity cannot be considered immutable, the fixed product of either ancient ethnic or religious origins. Rather, it has shifted and assumed new forms in response to the cultural environment in which the Jews have lived.