A History of Scotland: Look Behind the Mist and Myth of Scottish History 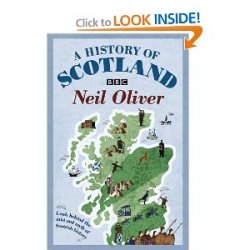 Archaeologist Oliver has become a BBC star hosting such history programs as Two Men in a Trench. This volume accompanies his latest series, about his homeland. Scotland is wedded, for better or worse, to England, and it's often been the latter for Scotland. Periods when Highlanders and Lowlanders stood independent of the English live on, however, in historical memory. It is to such popularly recollected names as William Wallace and Robert the Bruce that Oliver accordingly pegs his narrative, which unrolls from Celtic times to Roman times to Stuart times, which expired with Bonnie Prince Charlie's defeat in 1745. Like characters in a dramatic play, the historical figures are pithily characterized (Mary Queen of Scots: "dynastic dynamite") and then sent into action. While populist in style, Oliver's presentation never caricatures its actors. He imparts impressions of them as real people with passions, convictions, and choices. Including such great Scottish cultural icons as poet Robert Burns, Oliver's warmhearted yet illusion-free survey of Scottish history piques interest in the auld country.