The Dead Sea Genesis Apocryphon: A New Text and Translation with Introduction and Special Treatment of Columns 13-17 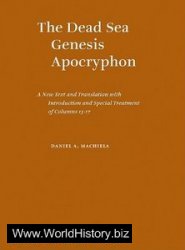 The Dead Sea Genesis Apocryphon: A New Text and Translation with Introduction and Special Treatment of Columns 13-17
Author: Daniel A. Machiela
BRILL
2009
ISBN: 9004168141
Pages: 328
Format: PDF
Size: 14 mb
Language: english
The so-called Genesis Apocryphon (1Q20) from Qumran Cave 1 has suffered from decades of neglect, due in large part to its poor state of preservation. As part of a resurgent scholarly interest in the Apocryphon, and its prominent position among the Aramaic Dead Sea Scrolls, this volume presents a fresh transcription, translation, and exstenive textual notes drawing on close study of the original manuscript, all available photographs, and previous publications. In addition, a detailed analysis of columns 13-15 and their relation to the oft-cited parallel in the Book of Jubilees reveals a number of ways in which the two works differ, thereby highlighting several distinctive features of the Genesis Apocryphon. The result is a reliable text edition and a fuller understanding of the message conveyed by this fragmentary but fascinating retelling of Genesis.