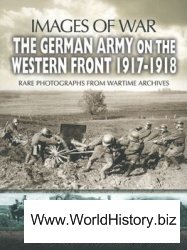 This highly illustrated book covers the German retreat from the Somme, through the defensive battles of 1917, the Kaiserschlacht (Kaiser's Battle) of early 1918, to the final Allied offensive from August to the end of the War. The post-Armistice events are also covered as the implications of defeat sunk in on an exhausted nation and its shattered army.