Scandinavia in the First World War: Studies in the War Experience of the Northern Neutrals 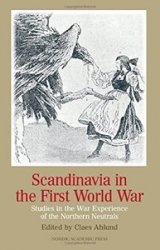 Author: Claes Ahlund
Scandinavia in the First World War: Studies in the War Experience of the Northern Neutrals
Nordic Academic Press
ISBN: 9187121573
2013
Format: EPUB
Size: 20,3 МБ
Language: English
Pages: 360
Denmark, Norway, and Sweden all managed to stay out of World War I, but all three countries were deeply affected by it. Opening with a systematically comparative introduction to the history of the Scandinavian countries during that time period, this account then presents 13 case studies examining the impact of the war on these neutral entities. From inflation and the shortage of consumer goods to widespread poverty and political unrest—not to mention the thousands of Scandinavian soldiers who participated in the war—this unique compilation analyzes the military and economic consequences as well as the vital political and social issues raised by the conflict.