Carnage: The German Front in World War One (Images of War) 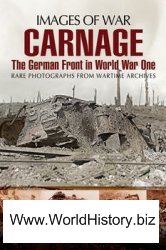 These amazingly well preserved photographs originate from German collection. They cover the full gamut of the dreadful conditions that all troops involved in that ghastly war experienced between 1914 and 1918. The collection portrays life and conditions in the German trenches, the carnage of the wrecked villages and buildings in which they lived and fought and views of the destruction wrought by the Allied offensives. Many of the photos show downed British and French aircraft and often with their crew, dead or alive. Captured British and French troops are seen being held before shipment to PoW camps well behind the lines. The utter destruction of the country surrounding the Front is difficult to comprehend.