Rise Of The Tank: Armoured Vehicles And Their Use In The First World War 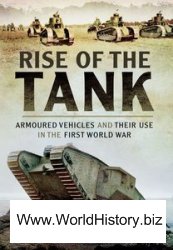 Author: Michael Foley
Rise Of The Tank: Armoured Vehicles And Their Use In The First World War
Pen and Sword
ISBN: 1783463937
2014
Format: EPUB + PDF (conv)
Size: 4,1 МБ + 22,0 МБ
Language: English
Pages: 256
Rise of the Tank will be concentrated on the period of the development of the tank and its use in the First World War. This will appeal to those interested in new developments in war and those interested in the First World War generally. The book will be especially relevant due to the forthcoming centenary of the beginning of the war and for this reason it will be easy to promote the book as there will be a lot of media interest.
Using the resources of the Imperial War Museum, The National Archives and the Tank Museum, Rise of the Tank will have lots of information available on the development and use of the early tanks as well as personal reminiscences of those who fought in them.
The author, Michael Foley, has also collected a great deal of material from the period such as the First World War field service pocket book of a 2nd lieutenant of the 10th Tank Battalion and copies of various magazines of the period. He will have also be accessing First World War newspapers to find original and rare archive sources.