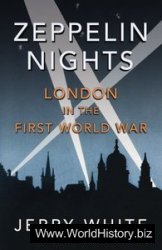 Author: Jerry White
Zeppelin Nights London in the First World War
Bodley Head
ISBN: 1847921655
2014
Format: PDF
Size: 74,3 МБ
Language: English
Pages: 368
11pm, Tuesday 4 August 1914: with the declaration of war London becomes one of the greatest killing machines in human history. Hundreds of thousands of soldiers pass through the capital on their way to the front; wounded men are brought back to be treated in London’s hospitals; and millions of shells are produced in its factories.
The war changes London life for ever. Women escape the drudgery of domestic service to work as munitionettes. Full employment puts money into the pockets of the London poor for the first time. Self-appointed moral guardians seize the chance to clamp down on drink, frivolous entertainment and licentious behaviour. As the war drags on, gloom often descends on the capital. And at night London is plunged into darkness for fear of German bombers and Zeppelins that continue to raid the city.
Yet despite daily casualty lists, food shortages and enemy bombing, Londoners are determined to get on with their lives and flock to cinemas and theatres, dance halls and shebeens, firmly resolved not to let Germans or puritans spoil their enjoyment.
Peopled with patriots and pacifists, clergymen and thieves, bluestockings and prostitutes, Jerry White’s magnificent panorama reveals a struggling yet flourishing city.