The Soviet Air Force Since 1918 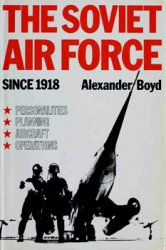 While the Soviet Russian naval buildup made Western headlines, the expansion of their air power went largely unnoticed. By 1977, that air force commanded a larger share of the Soviet Russian defense budget than the navy. This comprehensive book reveals for the first time in English what happened to the air force in the 1930's during Stalin's purges and the drastic effect on operational performance, how in the first three years of World War II the Soviets then reversed the balance of air power against the German Luftwaffe, and how the organization and concepts created during the war determined the kind of air force that was later expanded in the Cold War. Alexander Boyd's fluency in Russian enabled him to use extensively a wide range of then contemporary Russian documentary material which portrayed the men behind the planes: the commanders, the designers, the pilots. Boyd also showed how quickly the Soviets assimilated the technology of the jet and atomic age and how their then new strategic bombers complicated the SALT-2 talks between the Russian government and the United States. THE SOVIET AIR FORCE included production maps and training centers as well as diagrams of the command structure that was in force during the Cold War.