The Illustrated History of World War I: The Battles, Personalities, Events and Key Weapons From All Fronts In The First World War 1914-18 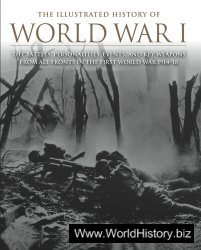 The first truly total war, the ‘war to end all wars’, shocked the world with its scale and brutality. Men from both sides went to war in August 1914 expecting to be home by Christmas, but on the Western and Italian Fronts troops became locked in a grim stalemate of trench warfare. For the first time, advances in both agricultural and industrial production had made it possible to equip and sustain mass armies for years in the field.
The Illustrated History of World War I describes a conflict that began with a naval arms race in the early 1900s, and ended in 1918 with the deaths of nearly 23 million soldiers of all nations. As many more would die in the influenza pandemic that raged after the fighting had ceased. The war brought great social, political and military change. The innocence of the Victorian world was gone, replaced by an era of uncertainty.
With the aid of more than 250 black-and-white photographs and full-colour artworks, The Illustrated History of World War I recreates the battles and campaigns that raged across the surface of the globe, on land, at sea and in the air. Including full colour maps of specific actions and campaigns and feature boxes explaining important events and personalities involved in the conflict, The Illustrated History of World War I provides a graphic and compelling account of the first truly modern war.