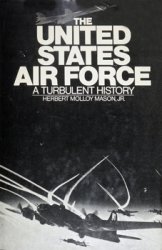 Less than seventy years after Orville Wright's plant fell apart during an army demonstration, the United States Air Force, with its nuclear capability, has developed into the nation's most powerful political and military weapon. Here is the complete story of this amazing technological metamorphosis. The slip-shod, hair-raising first few years were a curious mixture of comedy and drama. Under the stress of flights at 46 mph, propellers fell off, wings ripped in half, and telephone poles were a lethal threat to every pilot. In 1916, Pancho Villa was never as safe as when the first provisional aero division crashed its way through Mexico, looking for him after he had raided a Colorado town. The two world wars, of course, and the years between them, firmly established the value of an efficient air force. This powerful emergence began with Woodrow Wilson's commitment to supply the allied cause with 22,600 planes, fewer than 1,000 of which ever reached the front. During the interim years, the flamboyant prominence of Billy Mitchell, Benny Foulois, and others, helped to promote the fledgling air corps despite furious military, public, and congressional opposition. Finally, the awesome German Luftwaffe forced franklin d. Roosevelt to call for a crash development program. With only a dozen b-17 bombers at the time of Hitler's invasion of Poland, the U.S. would end World War II with the bombing of Hiroshima and Nagasaki. This advent of nuclear capability destines the air force to controversy for the rest of its days.