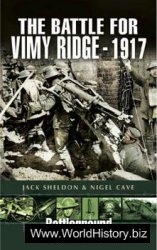 In a new departure in the Battleground Europe series, this book is a guide to both sides of a major battle - in this case to the Canadian Corps operations against 1st Bavarian Reserve Corps at Vimy from 9 - 12 April 1917, which formed part of the opening of the British offensive, known as the Battle of Arras. Historically, the capture of Vimy Ridge was an event far more significant than its undoubted military importance alone.